The world is undergoing a huge transformation called Digital Transformation (DX), in which previously manual workflows are being turned into automated versions. To accommodate that shift, companies have been applying automated workflow management tools, among which is Apache Airflow. This blog will give a closer look into Airflow, its core, Directed Acyclic Graphs (DAG) and the examples of the implementation of DAG to define workflows. Alright, let us begin!

Airflow is an automated workflow manager. It helps to programmatically create, run and monitor workflows regardless of how large, how complex they are, by means of representing the workflows as directed acyclic graphs (DAG/đồ thị có hướng) of tasks. Airflow was originally created as an open-source utility for supporting Airbnb’s workflows back in 2014. Airflow is designed to be dynamic, extensible, elegant and scalable.

The idea behind Airflow was “configuration-as-code”, which is to manage configuration files in repositories (in the same way as our management of source code), offering testability, maintainability and collaboration. To realize this idea, Airflow was created to employ Python language to create its task graphs in place of markup languages because of Python’s ease of importing existing supporting libraries and classes. Task graphs in Airflow can be written in just one file. Therefore, Airflow is known to be pure Python.

Ever since Airflow became open-source, there have been an increasing number of cloud service providers employing and providing their managed Airflow services. The most notable service available out there is the Google Cloud Composer, which combines the robust nature of Airflow in workflow orchestration with the already-famous distributed nature of the Google Cloud Platform and the large Google Cloud ecosystem, resulting in a user-friendly experience of managing workflows that involve several different services, for instance: Getting data from other data sources, then transferring to BigQuery, finally updating the dashboard in Google Data Studio. By a seamless integration with BigQuery combined with Airflow’s, it became apparent that the use of Airflow is beneficial in performing automated data-related workflows (for instance: data warehousing, machine learning, etc.). Also note that Airflow has no concern with data flows – it simply makes sure that the right tasks happen at the right time.

What does Airflow do?

When talking about workflows, we talk most specific about the order in which things are done. For instance, your typical “get-out-for-work” workflow is like: have breakfast → change your clothes → get out of the house → lock the door → go to work by bus. In the field of IT, workflows would mostly refer to “automated workflow” which contains a number of running tasks with a specific goal. A commonly seen example is a cron job, which is essentially an automatic task that we schedule for our personal computers to operate at a specific moment in time, like “to defragment the hard disk drive then write log to a text file at 6:00AM every Monday”. Apache Airflow bears a huge degree of similarity to those aforementioned kinds of “workflows”, the difference being that Airflow is designed to tackle much larger, much more complex automation problems than a small cron job. Companies world wide have been employing Airflow in solving such problems as:

and so on. Of course, depending on our creativity, the list of what Airflow can do may be a lot more than what we have listed.

Some of Airflow concepts

How to run Airflow (local first)

Before we can do anything with Airflow (declaring tasks & workflows), we need to setup a small test environment. The page Running Airflow locally has given a very thorough guide. Please kindly follow the guide by Apache until you have started the webserver and scheduler successfully, at which moment you are presented with the following page: 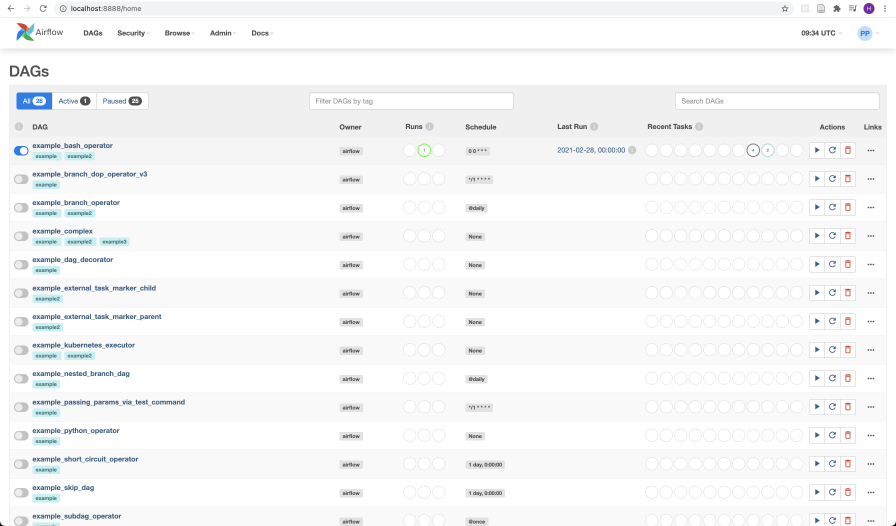 Then the workflows can be executed either by the command-line interface or by interacting with the web GUI. To start a DAG immediately, either flick the switch at the head of the DAG’s line or use the trigger DAG button in the Actions button group.

Alright, that’s a lot of conceptual part to get started with Airflow. Now it’s time we tried to build some simple DAG. Starting version 2.0, Airflow has offered decorator-based task and DAG declaration, however since most of its documentations still contains non-decorator versions, it would be easier to start with non-decorator DAGs and tasks first. We shall start with the following workflow:

To make things easy, we will define all the trio as PythonOperators that perform nothing but execute simple print statements. In reality, users can even define custom operators that handle more complex operations, which will be briefly discussed in later sections. For even more simplicity, both workflow and operation logic are defined within the same file (in reality, they should be separated).

First of all we need Airflow’s libraries imported:

Now we need to define the DAG first, so that inner operators can be assigned to it.

We will define the operators. Firstly, print_date is an operator used to print the current date/time. We first define the print_date_time function:

Similarly, we will define the other two operators:

The DAG file is completed. Supposed that we have created the DAG, named it “py_op_example.py” in the default folder of Airflow (~/airflow/dag). Now we can run it by executing:

Now our DAG is scheduled to run by Airflow. You can check the progress using the Airflow webserver interface.

Then we will come to more complex (yet not really hard to understand) sample workflows that were written for interaction with Google’s BigQuery. The full file can be found here. We only discuss one of the featured examples: 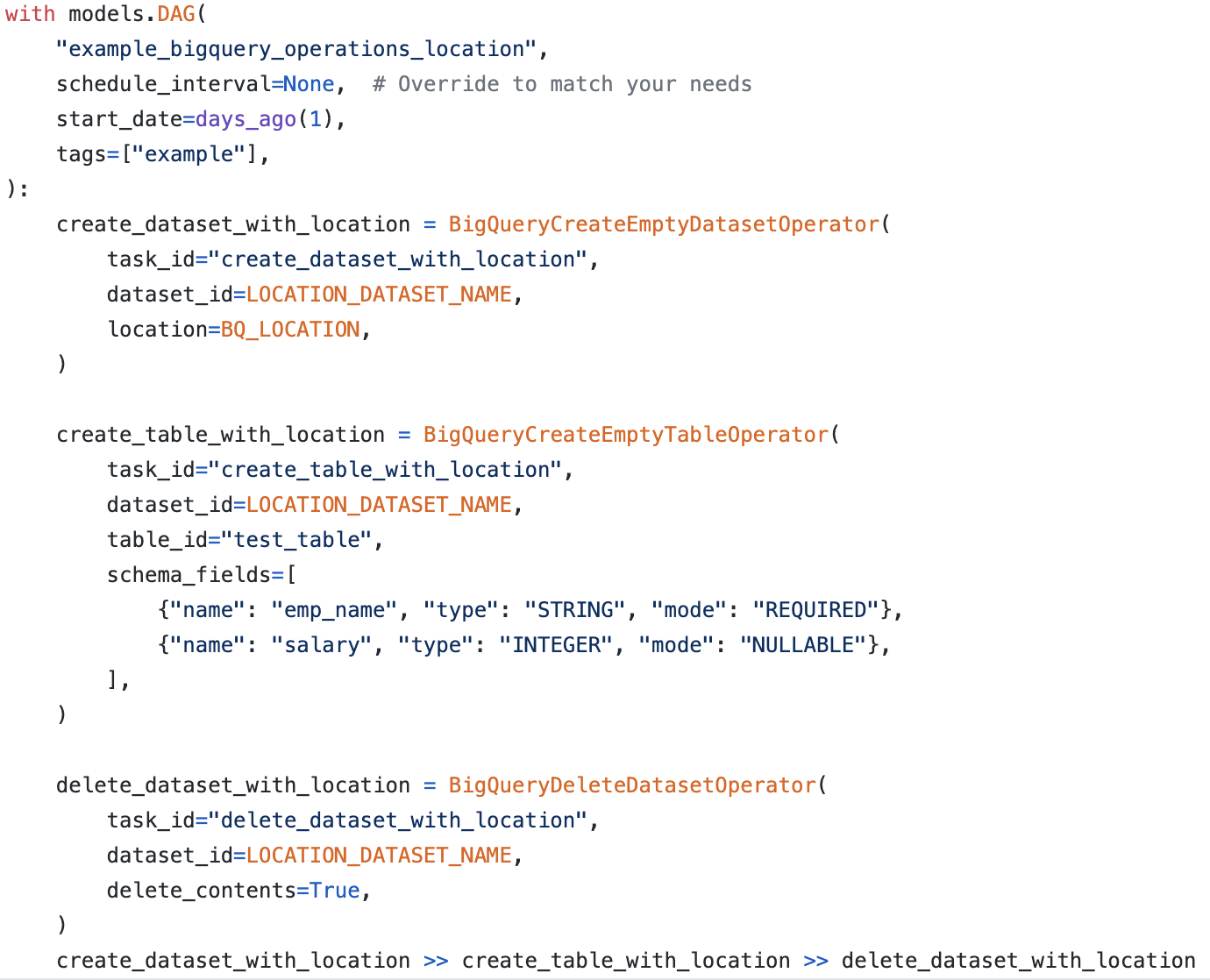 While the above example may seem to be trivial, it has successfully demonstrate the way we can work with operators from arbitrary providers.

Sometimes, relying on just pure standard operators may not be enough for your work. Therefore, Airflow also provides a mechanism to define your own operators, simply by extending from BaseOperator class and overriding the execute method. For instance, we can move the aforementioned print_date operation logic to a separate class, like following:

Then PrintDateOperator can be imported and used like any other type of operator.

In this blog, I have taken you through the most basic parts of Airflow. There is so much more about Airflow that I cannot share yet in this blog, see you in later blogs!