To a newbie in an advertisement technology company, acquiring business knowledge is a major obstacle.
Recently I came across a concept which I found interesting but not quite obvious: Creative. After seeking explanations from a veteran in the company (Mr. Tran Duc Toan), it turned out that the concept should be understood within a broader context. Recognizing the importance of this knowledge, I choose to post the context explained by Mr. Toan, for the benefit of our future newbie. The context is expressed by a drawing which typifies an Ad flow like below. 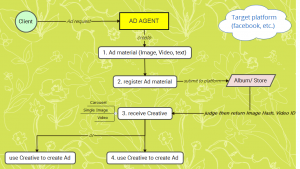 The Ad flow begin from the left-top corner of the drawing:

This is the general context of Advertisement business as I understand. Within that context, to me, a Creative is an Ad material which already stored in an Ad platform with a specific identity, ready to be used to form an Ad.

Still I am fully aware that this understanding may be not accurate yet. If you notice any inaccuracy in the content above, please point out for me. Thank you very much.